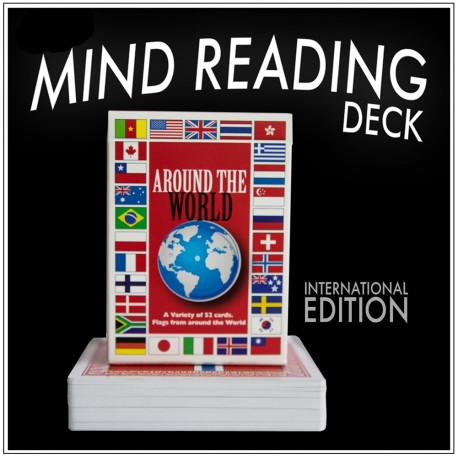 Around The World Mind Reading Deck

Around The World Mind Reading Deck

Show your spectator a deck of playing cards with different backs, each with a flag from around the world. Ask your spectator to think of any card, remove it from the deck, and remember the flag on the back. You then amaze and astonish as you reveal your correct prediction.

Know what card they chose every time. This deck is a must have for every magician, every skill level.

Easy to learn for powerful performance.

This deck is poker size.

The Around The World Mind Reading Deck was created by Rob Stiff and based on a long history of magic effects...

1971 Fred the Card by Dave Campbell (dedicated to Fred Lowe)

1973 I'll Name Your Card by Nick Trost and Aldini

1980 Oscar another variation by Nick Trost

1981 A Card Named Fred in Abracadabra vol. 73, 1981 By Ali Bongo.  This was the method or version that was popularized by Don Alan as "Fido" & sometimes called "Clyde"

1985 Final Fred presented in Madrid at FISM by Phil Goldstein

*This crediting section is in process for further updates.

Nearly all these Magicians performed at The Magic Castle.

The Magic Castle is a performance venue, restaurant and private club. A typical evening features several magic and sometimes variety arts performances, as well as a full service dining room and several bars in a country club atmosphere. A dress code of formal party attire is strictly enforced. Entry is only allowed to members and their guests. The lobby of the Castle has no visible doors to the interior, and visitors must say a secret phrase to a sculpture of an owl to gain access, exposing the entrance to the club. Nightly, five different magic performances are showcased in three different theaters, with additional performances added in the Peller as well as Hat and Hare Pub and W.C. Fields Bar on weekends. Magicians perform in several different theaters, including the intimate Close-Up Gallery, a larger Parlour of Prestidigitation, and stage illusions in the Palace of Mystery. Informal performance areas near the five bars give magician members the space for impromptu magic for guests and other patrons. In the music room, a piano is played by invisible "Irma," the Castle's "resident ghost," who takes musical requests. In addition, magician Misty Lee, the first female staff medium at the Magic Castle, regularly performs Houdini Séances at the castle. Those under 21 years of age are not permitted during evening performances. However, on Saturdays and Sundays, the Castle hosts an "all-ages" brunch and performances which are open to members and their guests, including those under the age of 21. During brunch, the Castle's "Junior Members" (ranging in age from 13 to 20 years old) perform in the Close-Up Gallery.